The Rich History of Our Barbecue Restaurant

The story of the oldest Black-owned business in Lawton, Oklahoma started in the cotton fields and ended up being a successful four-generation business. John & Cook’s Realpit BBQ, located at 1310 S.W. 21st, has been in business since 1936. The family’s secret recipe has been handed down from generation to generation.

John Weathers started the business in his backyard at 15th St. and Washington. The story began when Mr. Weathers left his home and four sisters in Geneva, Texas and moved to Lawton, Oklahoma without telling his family where he was going. One of his sisters, Verna Cook, missed him so much that every time a stranger passed through Geneva, she would inquire about her brother’s whereabouts. One day, a friend stopped to inform her that he found her brother. Verna and her daughter, Mearline, traveled 800 miles by bus to reunite with her brother, John. After returning to Geneva, tragedy struck. Verna’s and her husband’s (Lamar Cook) cotton crop was washed away due to harsh weather! Shortly after this, Verna, Lamar, and their seven children moved to Lawton.

Before passing away, John Weathers passed down his secret recipe to Lamar Cook. Lamar and Verna Cook opened John & Cook’s BBQ in 1950 on 11th Street and Pennsylvania. Not only was it a BBQ restaurant, but also a teen club for the young crowd to hang out and stay out of trouble. 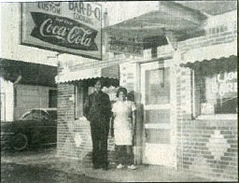 Since then, there have been five John & Cook’s BBQ restaurants extending from Lawton, Oklahoma to Santa Monica, California to Maywood, Illinois. Currently, John & Cook’s BBQ is in its fifth generation headed by brothers, Lonzo Gaines and Troy Certain.

Great news! Lonzo and Troy have opened a 2nd location! You can see them anywhere in Lawton and even Dallas, Texas at their mobile “John & Cook’s Catering Truck.”

People often ask why John & Cook’s BBQ is so successful. The response from our customers, “You can’t find a better-tasting BBQ anywhere!”